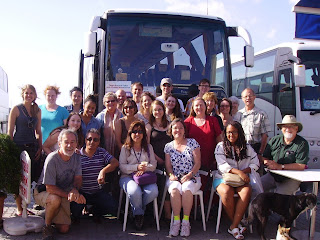 As we crossed the border from Turkey into Greece we also crossed from an officially secular state where Christianity is under active persecution and limited to a small remnant of Greek Orthodox churches in Istanbul and Izmir plus an unknown number of house churches; to an officially Christian state where the danger is creeping secularism. It feels different. I found the daily calls to prayer oppressive. Often, by co-incidence I would be up early and spreading my own prayer mat – a large bath towel on a marble floor to do my 20 sit-ups and push-ups. We all have our rituals.

Greece feels different. As we had dinner on the top floor of our hotel in Kavala (where the Apostle Paul first landed in Europe) I noticed a small cross on top of the nearby mountain. It was later lit up and visible in the dark. In exploring the small (60,000) town of Kavala I went around and found the entrance to a small Orthodox church near our hotel. It was open at 6.30 pm on a Friday. There were real people praying and lighting candles inside. What a change from two weeks of being in churches that had been desecrated and turned into mosques and museums! I felt the presence of the Holy Spirit. It was a beautifully decorated church with the same type of fresco's and mosaics that had been covered up or stolen from St. Sophia in Istanbul. Instead of empty frames where Christian and Muslim iconoclasts had removed or soldiers had stolen icons – there they were. There was a warm glow in the place and like the early evangelists I went out and shared the good news with my fellow travelers. 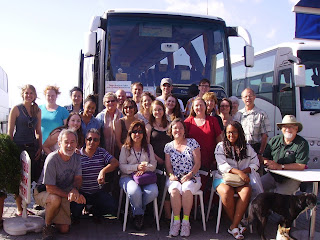 Today (May 25) we visited Phillipi (modern Lidia) and saw where Paul had preached, been held in jail and baptized Lydia. There are three church buildings – basilicas A and B and an Octagonal church. The floor plans are clearly visible – as is the altar area. All are huge, reflecting the power and dominance of Christianity in the Fifth and Sixth Centuries. There is a new Orthodox Baptistery down by the river where Paul would have met and baptized Lydia. It just happened that a baptism was in progress so we were able to enter and discretely observe. It was very encouraging for me as a priest to see a real priest in a real church with real liturgy and worship. I felt like I had come home spiritually.
at 10:25 AM