Antioch and the Birth of the Gentile Church – May 11 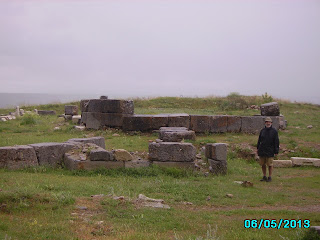 It was a long hard journey for Paul to get to Pisidian Antioch and preach in the synagogue beneath the ruins of the church where I am standing (the other Antioch is in Syria) so we did not really mind the 7 hour bus ride diagonally across Turkey from Cappadocia. As we arrived the sunny weather became a downpour. We took this as a reminder of the hardships Paul also faced in spreading the Gospel. As I write this our bus is descending through the incredibly steep mountain pass Paul must have walked up from the coast.

In addition to the physical hardships, we could see in the relative layout of the ancient city that the power and authority of Rome towered over the main public market and was directly facing the synagogue below. Paul walked into a situation where both Rome and the Synagogue already claimed divine authority. His message, delivered in the synagogue below the church where I am standing, was nothing less than that both were wrong. He was proclaiming a new religious authority, graciously suggesting God would pardon past ignorance but not forever. When the Jewish authorities opposed the message he turned to the gentiles and the Christian Church was born.

The takeaway for me was an enhanced realization of how hard it is to proclaim a different understanding of God. In spite of Pauls’ oratorical skills, theological knowledge and the evidence of miraculous healings and the gifts of the Holy Spirit; they refused to believe the good news of God’s love in Jesus. Perhaps people are more lazy than inquisitive. We get angry when our pet ideas are challenged and there is a possibility we are wrong. It is as if we prefer being wrong to the mental and political struggle of finding the truth. Our religion is our established comfort zone and we do not like the discomfort of exploring change. Both Rome and the Jewish leadership were using the claim of divine authority to support their political and economic position. Both had a lot to lose if Paul was right. Both ended up opposing Paul, the truth and God – to their detriment.

This goes on in our own time. We are in the middle of a ferocious battle for the authority and reliability of the Bible. Academics including NT Wright, Ben Witherington, Richard Bauckham and Craig Evans are defending the authority of the Bible against popular and academic Biblical de-constructors including Elaine Pagels, Bart Ehrtman and Dominic Crossan. This is literally a life and death struggle for the church and all serious Christians - we can not loose this battle. We had quite a discussion of this on the bus with students asking how theological conservatives can be so narrow and theological liberals so empty. I blew my cover as an Anglican priest and shared my observation that theological liberals do not believe in the miracles of Jesus and spiritual evil – which gives them a completely unrealistic worldview. We appreciated Paul's struggles much more deeply!
at 12:49 PM