Father John in Cappadocia May 10 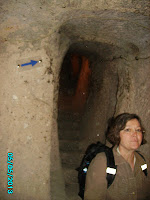 Our day began with a wakeup call at 4.15 am so again this may not be too coherent. Most of our study tour group were going ballooning which is a huge tourist thing here because the landscape is so unique. Over 100 ft. of volcanic ash was deposited and over time formed a special kind of rock called ‘tufa’. It is very soft and erodes much like the badlands of Drumheller Alberta. Where harder layers are on top this erosion creates strange mushroom shaped rock formations - which can be dug out to create underground cities as in picture .

It was dark when we got to the launch site but as it got lighter we could - see the outlines of over 50 huge balloons, each carrying up to 30 passengers were springing up from the ground as hot air roared into them. Riding in a balloon is magical in that the only sound is the roar of the burners. You just drift along, often low enough to touch the treetops. It was windy so we stayed below 500 meters. Our assignment was to ponder the question of ‘what kind of spirituality would emerge in a place like this? Our Professor, Dr. Charles Neinkirken had briefed us about St. Basel who went to Egypt in the Fourth Century to study and experience the desert spirituality of the “Desert Fathers” like the hermit Anthony. When Basil came back to his home in Cappadocia he rejected the solitude approach as an attempt to escape from Christ’s commandment to love one another. His famous words were “When I am alone whose feet can I wash?”

Instead he worked out a monastic rule based on community which is still in use in the Eastern Church. Basil, his sister Marika and brother Gregory devoted their lives to rescuing the Church from destructive and heretical disputes over the nature of Christ.

The rest of the morning was spent exploring a seven story underground city carved in the tufa rock where 3,000 people could hide from the various invaders from the Hitites 25 Centuries before Christ to the Moslems in the 7th. Century. The point being that in the world there is persecution and people have to adjust or perish. In the afternoon we visited a whole valley of carved chapels and homes carved into the rock by monastic communities. These lasted until the post-war settlement of 1923 whereby modern Turkey was created – along with forced population movements that meant the Greek monks had to leave.

The spiritual takeaway? Life is dangerous so we need to think globally, work in community and adapt locally. Perhaps this is why 23 people from Calgary are exhausting themselves with long flights and long days trying to understand how Christianity was saved and enriched by the Caoppoadician Fathers in the late Fourth Century.
at 12:37 PM