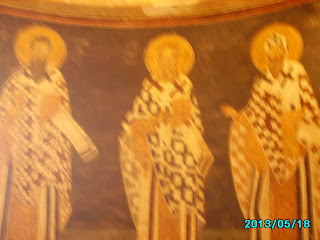 It was exciting to see Troy and the difference between amateur and professional Archeology. A German businessman with no training in History or Archeology was obsessed with finding the ancient treasures of Troy, hired local men to dig huge trenches with complete disregard for what was dug up and where it was from. He found the treasures, lied to his workers that he had just found a few pots and left with jewelry and precious artifacts. Professional Archaeologists who followed – and have done a great job of identifying 9 layers of civilization up to the Roman Period, were so upset they actually left one trench, “Schliemann’s Trench”, as a witness to the earlier destruction. Our guide Mel explained how you can tell levels apart by the types of wall – huge square blocks as opposed to less well cut stones, rounded boulders etc. We could also see where the sea had come into bays on two sides of the huge city – several of our city blocks in size. Troy, like Istanbul, would have controlled trade along this strategic coast. Near the parking lot a replica Trojan Horse has been built to show people how high the city gate would have been – and as a photo op.

Next we drove North on the coast, took a ferry across to the European side and drove into the chaos of Istanbul. This city of 15 million is overwhelming in its busyness and impossible traffic. The next day our bus was stuck in traffic for over an hour and late in picking us up at the end of the day. It is exciting to realize that Turkey has both a European and Asian side. This huge and fertile land is the bridge between Eastern and Western Culture. That is a blessing in that the history and culture is so rich – and a curse because Turkey is in the middle between what was Christendom and what is becoming a more fundamentalist Islamic empire. We had an interesting example of this at the Blue Mosque yesterday. Apparently a new dress code has been introduced in the past two months. Women have to cover their hair and everyone has to cover their bare arms, neck and legs. Our guide refused to do this and was confronted by a security guard. She eventually complied but was very upset about this. Turkey’s Constitution defines the state as secular and respectful of all religions. The current government is pushing a more aggressively Islamic agenda by gradually converting churches and mosques that have become museums into active mosques and imposing dress regulations.

On our last day in Istanbul we visited the Chorea Church – our first real visit to a ‘real’ Christian church. They were under a foreign government and allowed to continue as a church when the Ottoman Turks captured Constantinople in 1455. By this time the Crusaders had already looted most of the icons and ornaments from churches – including Haigia Sophia. There are frames but no icons – a result of both Christian and Muslim iconoclast ism. In Chiora Church the wall and ceiling friezes were painted over with plaster which actually preserved the beautiful mosaics and paintings underneath. These have been restored in one of the best collections of early Christian art in the world. Chiora means outside the walls in Turkish but it could also mean out of here, meaning Christianity will eventually spread from here.

On the way to the Archaeological Museum we passed the home of the Greek Orthodox Patriarch and one of their churches. These are a magnet for Greek tourists who come to show support. Following the First World War Greeks, including clergy, were forced to return to Greece in a shameful example of ethnic cleansing. Over the past 17 days our tour group has fallen in love with Turkey and the Turkish people. Turkey is geographically similar to Canada – only smaller and warmer. We feel the pain of these kind people as they struggle to thrive in this politically and religiously charged environment. They need our prayers every day. Please pray for Turkey.
at 12:41 PM