Churches in Laodicea and Hierapolis and Colosse (Turkey) 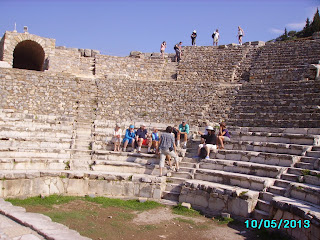 Yesterday after the post on Patmos we hiked up to Hermitage of the Prophet Elias on the highest point of Patmos. We were already tired from our hike to the beach and the reading of the entire Book of Revelation so it was a struggle to walk up the paved but steep path. The wind got stronger and stronger as the path got steeper and steeper. Could this not be a metaphor for our spiritual life as we have to work hard and exert ourselves to develop spiritual self-discipline and wisdom?

At the top there is a hermitage but the door was locked and we had not been able to get a key. The hermitage is controlled by the Abbot of the Monastery, who recently retired creating a vacuum in decision making. Finally we reached the top and were rewarded with a stunning panoramic view of the entire island – and a personal reflection by our leader Prof. Charles Neinkirken on the Book of Revelation. Revelation is dismissed by many Christians as an unintelligible vision of the End Time. The truth is that it is neither unintelligible nor only about a future event. Reversed Thunder, one of the books recommended for this Course contends that Revelation is nothing less than a brilliant summation of the whole Bible. Prof. Neinkirken noted that modern Christianity in many places has become a pale reflection of what it used to be. Instead of standing firm and proclaiming repentance and the good news of forgiveness the modern church avoids conflict with the culture. We have now gone so far as to bless same-sex marriages which have been historically outside the boundaries of acceptable moral behavior in all places and religions. The seven churches we are visiting in Turkey died from within long before they were overrun by Islam and the Ottoman Empire.

Our journey continued this morning (May 19) with a four-hour boat ride back to Kausadasi. As I write we are back on our old bus driving across the huge Meander Valley toward the site of ancient of three churches in the Lycos Valley (near modern) Denizli – Hierapolis, Laodicea and Colosse. The Meander Valley – from which we get the English word, meanders back and forth all along the coast, silting up ancient harbors which with the gradual sinking of the Aegean Sea are now far back from the present coastline. The soil is incredibly fertile so everything grows here. This fertility and massive agriculture everywhere in Turkey was completely unexpected to me.

In Revelation 3.14-22 the church in Laodicea is warned about being neither hot nor cold. The Risen Jesus warns them he will spit them out if they do not repent their loss of faith and recover their spiritual fervor. Like many churches today they had begun to take their faith for granted, reduce religion to a form and not really love Jesus with their hearts. This spiritual decay and severe earthquakes had reduced their great city of over 100,000 people to rubble. Laodicea was at a junction of major trading routes so grew rich from lending to desperate travelers at hugerates of interest. Their prosperity led to their spiritual demise. This should be a warning to us all.

Over the valley about 10 km away we could see the triangle of sites of ancient Colosse (i.e. Letter to the Colossians) and Hierapolis. We did not visit Colosse as the site has not been excavated. Hierapolis was a different story. The Turkish Government has a full-time year round excavation going on. I was amazed at how large these cities were – we walked for over a km. in 30 degree heat just to get to the middle of the site. There were the usual temples, market and theatres. But Hierapolis was a proud place – they famously declined to accept a gift of money from the Roman Emperor to rebuild after an earthquake. This was clearly not a community listening to the Holy Spirit and aware of their need for salvation – and they too passed.

Today’s take away must be the difficulty of keeping our eyes and hearts focused on Jesus when things are going well. That such massive stone cities could simply crumble into the ground reminds us that we are all temporaries.
at 1:00 PM