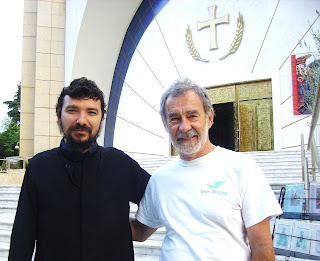 This question “How Have You Changed As a Result of This Trip?” was proposed for us on the last day of our 23 day trip through Turkey, Greece and Albania. Everyone on the bus was too exhausted to discuss this after over 6,000 km of bus - but today is a new day. We have had a good sleep and are on our way back to Calgary. My day started with the Holy Spirit reminding me to reflect on how I had changed regarding contending for the Faith, the Orthodox Church and the importance of living life to the full.

Those who have been following the trip blogs (below) will have noticed how much sheer hard work was involved in following the Apostle Paul for over 5,000 km by bus. “Following Ancient Paths” is an educational travel program of Ambrose University College in Calgary. Our group of 23 included two Faculty and students who were doing this for course credit. We were encouraged read 5 books and the Book of Acts which describes the three missionary journeys of the Apostle Paul. There were bus and on-site lectures by the guides, Ambrose and local academics. We read the relevant readings from Acts at the sites visited. A typical day began with breakfast at 7.00 am, travel and visiting sites until 7.00 pm and dinner at 8.00 pm.

1. Be strong in contending for the Faith
This was not a vacation! For me it was an experience of how much sheer hard work it must have been for Paul and the early Apostles to evangelize what is now Southern Turkey on foot in the Mediterranean heat. Where the Bible says Paul went somewhere; it does not give us any idea of how far he walked, how steep and dangerous the mountain paths were, how large and intimidating the cities he visited were or how savagely he was opposed by the Jews. Paul focused on the main Roman cities. Some of these like Antioch, Ephesus and Pergamum would have had over 200,000 residents. In each there would be a huge temple dedicated to Zeus or some other god dominating the town from the highest point. In Pisidian Antioch the synagogue where Paul spoke faced a massive temple at the upper end of the main street. The ruins - immense solid building foundations; radiate intimidating power. I was deeply impressed with the sheer courage it would have taken for Paul and his companions to proclaim Jesus as the only authentic lord and Savior.

The contrast with our contemporary Anglican Church which is avoiding conflict by accommodating itself to the (pagan /post-Christendom) culture is stunning. I have seen the courage of the Holy Spirit led early Church. This has strengthened me in my heart to be even stronger and potentially offensive in proclaiming the good news of God’s love and forgiveness – and our need for repentance and forgiveness. Be warned!

Another other take away has been seeing the fragility of faith and the devastation of faith and churches that has occurred in history. Churches can die. When Lucille and I were in St. Sophia in Istanbul thirty years ago we noticed the defacing of frescos and general bleakness of what was once the most magnificent church in Christendom. On this trip our guide explained what had happened. Christian and Muslim “iconoclasts” – people who oppose images in churches on religious grounds, had stripped or stolen hundreds of beautiful hand painted icons from all the bare frames we could see. Then the “Christian” Crusaders had sacked the City and church when their Venetian paymasters abandoned them. Finally the Ottoman conquerors (supported by thousands of “Christian” mercenaries) had turned St. Sophia into a mosque and now a bare and ugly museum. If you go upstairs to the huge balcony (larger than Calgary’s Cathedral) you can still see one fresco that has been restored and which gives a hint of the glory of faith that has been lost. In spite of a very progressive secular constitution that proclaims freedom of religion, Turkey is a spiritual wasteland with the exception of a few Christian house churches and Orthodox churches in three cities. The Turks are wonderful kind people – we should all be praying for them that they can resist the evil influences of Islam and live up to the promise of their constitution. They will have to actively and vigorously contend for the Christian faith or be crushed spiritually as their ancestors were

2. Discovering the Orthodox Church.
I had an important daily ritual of exercise and prayer on this trip. More than once in the morning as the local Imam broadcast the call to prayer outside my window, I was placing a bath towel on the cold marble floor to do my 20 sit-ups. We were worshiping different gods. It was mostly amusing but one time I felt like throwing up – an unusual thing for me, and probably a sign of spiritual pollution. While I admire most Islamic values and many Muslim people, the bottom line is that the god they worship was the local idol, a demon, in the village where Mohamed lived. I had my first glimmer of spiritual hope when we visited the Church of St. Nicholas in Demre. The remains of the beloved bishop who died in 343 were buried in a 6th. Century Basilica.  The Church has been excavated and is a magnet for Russian pilgrims who come by busloads to pray respectfully at the now empty tomb –  looted by Italians for relics. It was a holy moment to see these young people in serious prayer and devotion.

The visit to the Greek island of Patmos was another holy time as I have already written. I happened to meet the Greek tour guide in a coffee house and was able to tell her she was now famous and on the internet. The contrast between my Turkey experience and praying the cave where John (“The Theologian”) dictated his Revelation, visiting the Monastery and talking Theology with a monk was overwhelming. John, by the way, was the temporarily exiled Bishop and leader of many of the Churches we visited in Southern Turkey.

After experiencing the ruins of huge Christian communities in Laodicea, Hierapolis, Colossae (a hill), Philadelphia, Sardis, Smyrna (now Izmir), Thyatira, Pergamum and of course St. Sophia in Istanbul; it was incredibly refreshing to stumble into the holiness of St. Nicholas in Kavala, Greece. Our tour group saw the famous fresco outside the back of the Church depicting the Apostle Paul landing here on his way to Philippi and Thessalonica. I came back on my own and wandered around to the main door – which was open. Inside was a beautiful Orthodox church with a few people in prayer and lighting candles. I was so excited to find the real thing. I hurried back to the hotel to tell my Orthodox friends. Later in the evening we gathered a small group to join the locals in the square outside the church for a drink. We were home.

One of the highlights of the trip (see blog) for me was to visit the Church of the Resurrection in Tirana, Albania. Albania was ‘foreign territory’ for all of us. We found new life – political, economic and spiritual; springing up from the devastation of the Ottoman invasion, Venetian invasion, local tyrants and Communist oppression. Religion had been abolished by the Communists, clergy were exiled and churches turned into museums, movie theatres and cultural centers. This changed starting in the 1990s as the proud Albanian people tried to first develop without foreign aid then recently decided to work with the West. The brand new 2012 (and mostly paid for) Orthodox Church of the Resurrection is a symbol of spiritual resurrection. We had a short but powerful conversation with two priests and the Bishop who explained how they need the facility to teach a whole generation the Faith. Like other orthodox clergy I met – and in contrast to some of my Anglican Clergy friends; these priests radiated the love and joy of Jesus. I am currently reading Mac Culloch’s Christianity and have become greatly encouraged by and appreciative of the Orthodox Church and its ministry.

My third big change has been a growth in my love of creation and life. I was fearful of this strenuous and expensive trip to new places. I came home more determined to overcome my sloth and fear of the unknown and really enjoy life to the full.
at 4:02 PM